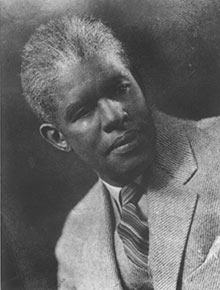 Roland Hayes was a classically trained black tenor, who, along with Paul Robeson, Marian Anderson, and Dorothy Maynor, broke the color barrier on the New York concert stage in the 1920s and ’30s. At one point Hayes was the highest paid tenor in the world.

He was born in 1887 near Calhoun, Georgia, to tenant farmers William and Fanny Hayes, on property where his mother was once a slave. After his father died, when he was eleven, his mother moved her seven children to Chattanooga.

After fifth grade, Hayes dropped out of school to help support the family. Working at odd jobs, he also sang on the street for pennies with a group he formed named the “Silver-Toned Quartet.” His mother, who wanted him to become a minister, made sure that the family stayed close to the church.

One of Hayes’s church responsibilities was to sing spirituals handed down from generation to generation and to teach them to the rest of the congregation. At church Hayes also heard a new kind of music—classical.

Later he recalled, “…one day a pianist came to our church in Chattanooga, and I, as a choir member, was asked to sing a solo with him. The pianist liked my voice, and he took me in hand and introduced me to phonograph records by Caruso. That opened the heavens for me. The beauty of what could be done with the voice just overwhelmed me.”

A local music teacher, impressed by his talent, offered to teach the young singer. At age twenty he entered Fisk University in Nashville. Later he became the lead tenor for the famous Fisk Jubilee Singers. On a Jubilee tour of eastern cities, Hayes decided to stay in Boston while the rest of the group went home. He felt that Boston would offer him the best opportunity to develop his career as a concert singer.

No Boston concert hall had ever featured a black singer and they weren’t about to change. Working and saving his money, Hayes accumulated enough to rent Boston Symphony Hall, where he paid all the expenses for his first concert. Hayes promoted himself and, with hard work and persistence, developed a successful concert career. He sang classical music but always included spirituals, in tribute to his mother and his roots.

Hayes wrote musical arrangements for spirituals, which he called American Folk Music. In doing so he preserved many songs which had never before been written down.

In 1920 he performed in London, England. Soon after this concert he was summoned to a command performance for King George and Queen Mary. Their interest opened doors for him throughout Europe.

Returning to the United States in 1923, he broke barriers as he gave concerts across the country at black colleges and prestigious concert halls including Carnegie Hall and the Boston Symphony. He insisted on low admission prices and integrated audiences. By 1924 Hayes was earning $100,000 a year, more than any tenor in the world, at a time when the average annual income was $750.

Hayes taught at Boston College and Ohio University and received numerous awards including the Spingarn medal from the National Association for the Advancement of Colored People. Hayes married Helen A. Mann in 1932 and had one daughter, Afrika Franzada. He died in Brookline, Massachusetts, in 1977, aged eighty-nine, and later was inducted posthumously into the Georgia Music Hall of Fame.